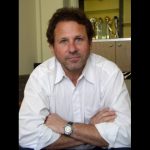 Elliott Kaufman’s career path is unique but has always revolved around architectural motives. When he began shooting in the mid 70’s his orientation was toward the fine arts. Kaufman developed ideas for site-specific photomurals and wall art much before this concept became a mainstream art venue. He was able to work in this capacity with corporate industrial clients such as Westinghouse, General Electric, Warner Brothers and The Walt Disney Company.

He then exhibited this work in such venues as in The Philadelphia Museum of Art, the American Institute of Architects, The Light Gallery in New York, and the Pennsylvania Academy of Fine Art. A New York State Council on the Arts grant led to the exhibit “Murals for Astor Place and its Environs” at the Houghton Gallery of the Cooper Union for the Advancement of Science and Art. He won a competition jointly sponsored by the Port Authority of New York and The New York Public Art fund, where he was awarded the commission to create a 35′ x 45′ public art mural outside of the Holland Tunnel.

His twenty-something years of shooting architecture and design allowed him to work with a full range of firms that have been prized for their vision and abilities and include Hardy Holzman Pfeiffer Associates, Gwathmey Siegel Architects,

Kaufman also devotes significant time to personal projects. His series on the Panama Canal was published as a six page photo essay in the Architectural Record. His Broadway Walk series was featured in Architecture Magazine . A 2007 solo exhibition of new personal work of the “Abandoned” series as well as the Panama Canal series was shown at B. Thayer Associates in New York and Dennis Wedlick in Hudson, NY. The Abandoned series was also a cover feature in View Camera Magazine as well as being a feature story in the February Double Exposure Magazine. A feature article/profile on specialized lighting techniques has appeared in the international magazine Photo District News.